Mark Kirkbride had me entranced early in his book, Satan’s Fan Club. After a few pages into a Kindle sample of his book, I knew I had to get in touch with him. Disturbing, dark, entertaining, and exceptionally well-written, Kirkbride is ready to take you into his personal nightmare.

“The man’s pajamas and woman’s nightdress are damp. The bed likewise. That is sopping. Because, visible through the slashed covers, the bone-deep wounds that criss-cross the couple’s bodies pump blood. Some of the flaps of skin resulting from glancing blows are like gills, breathing. Yet even as the cries die away, he carries on. Chop. Chop. Chop“.

If you thought that excerpt was disturbing and twisted, there’s plenty more in Satan’s Fan Club! I’m not surprised that it’s hit #187 in its genre for Kindle books. Trust me, you can afford the less than $5 to get a Kindle copy! It’s available here 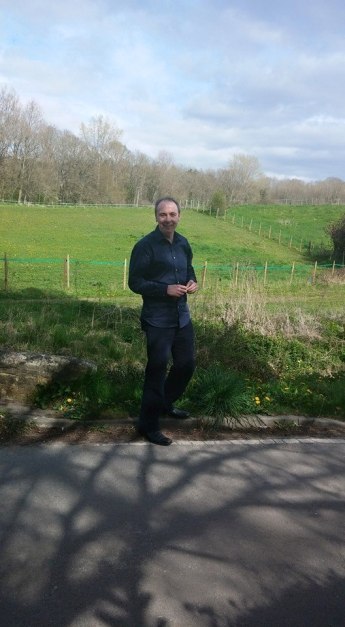 Q: What inspired you to write this book?

The inspiration for the book was someone telling me she’d met a person who could get people to do whatever he wanted, which provided me with the idea for the Devil character the twins meet at a nightclub. The title (originally The Devil’s Fan Club) provided the rest of the impetus for the book and then I was off and running. What would such a club be like? What could the name mean?

Q: What challenges did you have while writing it?

I wasn’t particularly trying to write fantasy but some of the situations and characters did tend in that direction, so probably the greatest challenge was grounding it all in reality–judging just the right degree of ballast to keep and how much to jettison.

Q: What do you want readers to take away from reading your book(s)?

Without wanting to give too much away, this book probably demonstrates the importance of thinking for oneself and not necessarily taking things on trust.

Q: If you could live in the story of a book, which one would you live in?

I’d quite like to live in a Philip K. Dick novel with the future coming at me and questioning everything.

Q:  When you’re not writing what do you do?

I have a day job. I like anything to do with the arts, which usually involves heading into the city, but I also like getting out into the countryside, which means heading the other way again. I’ve also got a serious reading habit.

Q: What else have you written? What else do you write?

I wrote a couple of novels before this one along with a children’s book. I also write short stories and poetry. At the moment I’m working on a novel about the end of the world, set next Tuesday.

Q: What’s your “writer studio” like or where do you feel inspired to write?

We used to live in a studio flat and I used to write with the television on in the background but since moving a few years ago I’ve had my own office. It’s very small and mostly contains books but it’s good to have a dedicated writing space.

Q: Of all the characters you have written, do you have a favorite?

I quite like Nick, the Devil character in Satan’s Fan Club, and I’m also very fond of the twins, despite what they get up to. As Hemingway said, “All things truly wicked start from innocence.”

Q: When did you know that you wanted to be a writer and how long have you been writing professionally?

I knew that I wanted to be a writer when I was at school. It started off with song lyrics, moved on to poetry and then burgeoned into novels but it’s all been a very gradual process with many years of apprenticeship. I’d already had poetry and shorter work published but Satan’s Fan Club was my first published novel.

Q: Where do you think book publishing will be in 10 years from now?

The full effects of the digital revolution’s shake-up of the publishing industry should all be clear by then. Hopefully publishing will survive in its present forms, perhaps with a few new ones. I would be extremely sad to see print fade away, yet I don’t really believe that it will.

Thanks to Mark for providing a picture. With that being said, no one’s allowed to use it without permission. Stay tuned for his next book about the end of the world, I know I will!